From Booklist: "this gentle portrayal of difference is powerful"

In these charming stories, Maryann Cocca-Leffler uses her daughter as inspiration for a delightfully spunky character. Janine Leffler, who gave her mother permission to tell her story about being a child with disabilities, focuses on the positive while navigating life with disabilities. She has become a role model to children and adults, encouraging them to focus on abilities and promoting respect, tolerance, and kindness.

From Janine: "I hope by sharing my story I will inspire others to be more tolerant and accepting of people’s differences and to inspire children who have disabilities. In the Janine books one of the big lessons is self-advocacy; standing up for yourself and loving who you are. Another is standing up for those who are being treated unfairly. These are very important messages to share with students in any age group since bullying is such a prominent issue these days."

"I hope kids learn to love who they are and don’t feel pressure to change to fit in."-JL 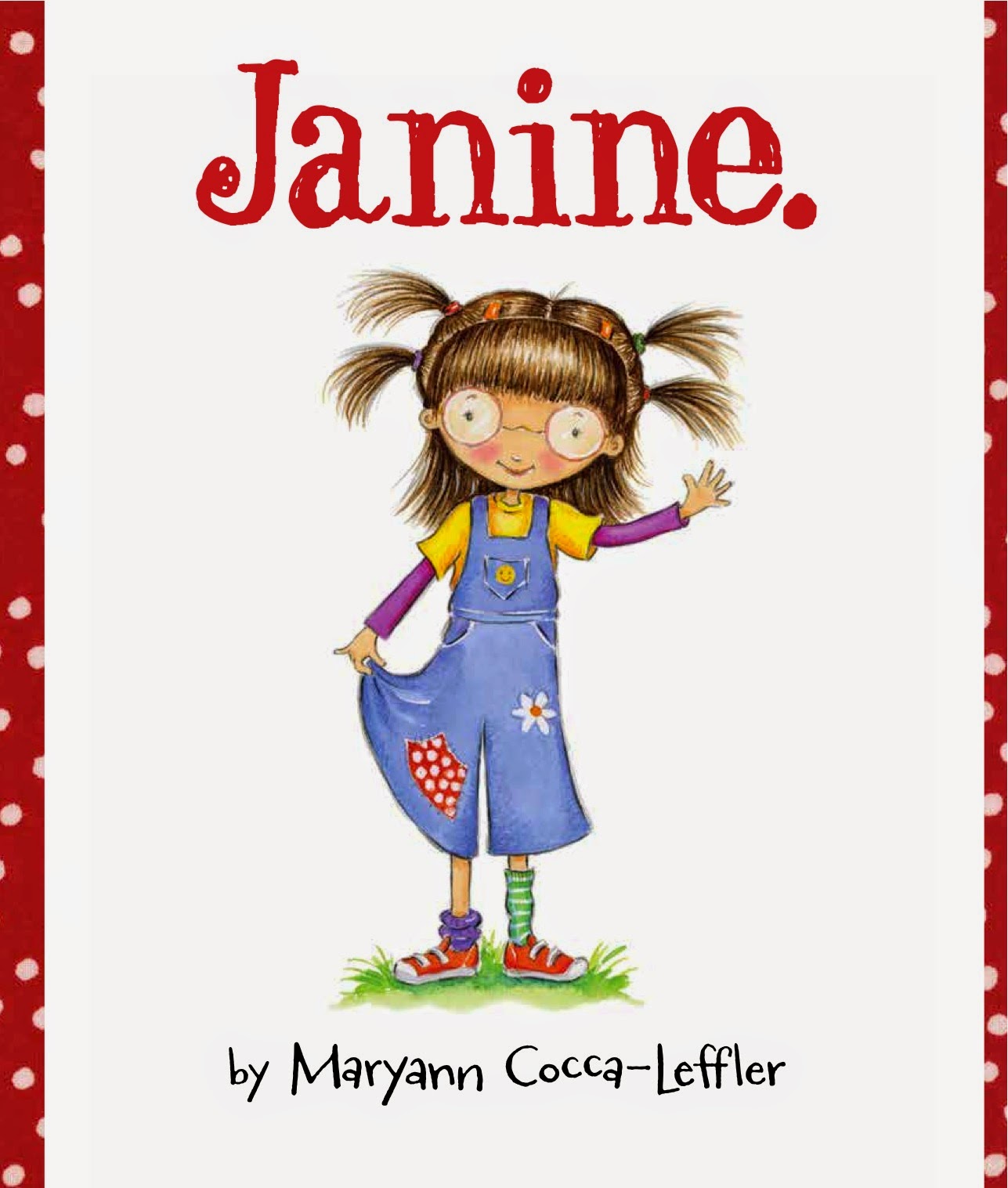 Meet Janine. She is one of a kind. She talks to her imaginary friends, reads the dictionary for fun, knows lots of big words and remembers, things-lots of things. She even has her own style of cheering! Some kids think she strange and want her to change. They don’t want her to come to their COOL party unless she changes. In the end Janine doesn't cave in to the pressure to change. She loves who she is and encourages others to be their spectacular selves!
THEMES: kindness, inclusion, self love, standing up for others, bullying. 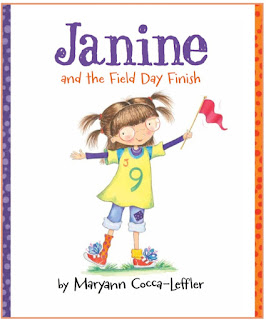 Janine is back! Today is field day and even though Janine is not good at sports, she is ready to compete. Her body just doesn't work like the other kids'. But no matter what, Janine cheers for everyone and tries her best. During the big race, her classmate Abby trips and falls. Janine is right there to help. But Abby is crushed that she won't win the race. In the end Janine shows her classmates that being a winner is not always about being number one!  (Check out video below)


Booklist:
Janine might act a little differently than other kids, but that doesn’t mean she’s not having a great time. The carefree young girl “sings aloud on the bus, talks to her imaginary friend, and remembers things—lots of things.” Her behavior is different enough that other kids start teasing her, and when she overhears plans for a party and asks if she can come, she gets rebuffed: “It’s only for COOL kids.” But Janine thinks she’s plenty cool. From her coke-bottle glasses all the way down to her slouchy, mismatched socks, Janine is one of a kind, and Cocca-Leffler’s colorful, stylized illustrations subtly show how her diverse classmates realize that the girl throwing the party isn’t the cool one—it’s Janine, who’s nice to everyone and likes herself just the way she is. Inspired by the author’s daughter, this gentle portrayal of difference is powerful, particularly since nothing can dampen spectacular Janine’s upbeat attitude. Little ones needing some extra encouragement to feel comfortable just the way they are should take a lesson from Janine.---Anne Miller

“With a heartening lesson about friendship, competition, and what constitutes winning, this encouraging picture book nicely demonstrates the value of confidence and generosity." -Booklist

"Her [Cocca-Leffler] colorful illustrations liven up this touching story of a child who does not fit in, but is self-assured enough not to worry about it. Readers will agree that this optimistic little girl has a mighty big heart."  -Kirkus

Publisher's Weekly:
Cocca-Leffler (Theo’s Mood) introduces an unconventional girl named Janine who stays her own course, even though it deviates from those of her classmates. She sings by herself on the bus, talks to her imaginary friend, proudly displays her retention of statistics, and dresses in an eclectic style that includes mismatched socks, patched overalls, and four pigtails. Naturally courteous and openhearted, Janine cheerfully deflects the taunts of her peers and refutes the suggestion that she has to change (“I do not! I like me”). When she isn’t invited to her chief tormentor’s party (“It’s only for cool kids”), Janine shouts out an open invitation to her own party; readers will have seen how Janine’s generosity and kindness have gradually won over her classmates, so it’s no surprise that all of them (save one) take her up on her offer. Cocca-Leffler’s portrayals of her heroine illuminate her thoughtfulness, resilience, and self-assuredness, and while the story’s message is far from subtle, it may encourage children who don’t fit in (and wouldn’t have it any other way). Ages 4–7. (Mar.)

Kirkus Review:
A slightly new twist on the kid-getting-bullied story.Janine is certainly her own girl. She sings loudly on the bus, talks to her imaginary friend, and remembers unusual things like the number of steps from here to there and classmates’ phone numbers. While everyone else is playing, Janine reads the dictionary or eavesdrops. One day, while she appears to be making a list, she overhears a classmate who is passing out a party invitation. She is quickly told that the party is “only for COOL kids!” (Among the depicted “cool kids” are an Asian-American girl, an African-American girl and a boy whose skin is relatively dark.) The birthday girl mocks Janine’s style, insulting everything from her fancy vocabulary to her choice of friends: “Janine, you are STRANGE! You have to CHANGE!” In the background, the “cool kids” become progressively more uncomfortable with the birthday girl’s meanness, so when Janine invites all the kids to a party of her own, they are poised to accept eagerly. It’s nice to examine how a group can choose kindness and thus take away a bully’s power. Charming illustrations highlight Janine’s independent style and unfailing optimism. Teachers looking for a positive solution should reach for this one. Children will enjoy knowing that Janine is actually the author’s daughter. An optimistic but nevertheless real solution to a common school problem. (Picture book. 5-9)

School Library Journal:
–Bespectacled Janine reads the dictionary for fun, plays with invisible friends, enjoys singing on the bus, and is kind to everyone. One mean student among her diverse group of classmates judges Janine’s behavior as bizarre and makes fun of her, but Janine is content being herself and sees no reason to try to blend in. The taunting classmate invites the “cool” kids to her birthday party, leaving Janine off the guest list and telling her, “You are STRANGE! You have to CHANGE!” Instead of feeling hurt or ostracized, Janine decides to host her own party in which no one will be excluded. Though some of the other children have remained silent and appear to side with the mean girl, they soon realize that Janine is the nicer child and excitedly agree to attend her party. The text, which appears hand-lettered, and the various-sized and brightly colored illustrations, are engaging and offer much movement. Gently dealing with a bully while remaining true to herself, Janine is an admirable character who doesn’t need to put someone else down in order to feel good about herself. VERDICT: A refreshing tale of being true to oneself.–
Kids Home Library. A syndicated column by Lee Littlewood:
Janine wears patched overall culottes, talks to imaginary friends and reads the dictionary for fun.She's not invited to parties and is made fun of for her clothes and actions. Janine, however, is unfazed. When kids say, "You are NOT cool. No one dresses like that!" Janine replies, "I do! It's spectacular!" She hangs out with other unpopular kids and still has the guts to make up her own crazy dances and chant her own baseball facts, even after admonishments from the cool kids. When she's not invited to a party, she decides to have her own party, and happily many friends choose to attend.Maryann Cocca-Leffler shares her inspiration for this upbeat, empowering tale: the real Janine Leffler. Everyone is invited in this rollicking ode to self-esteem, a socially important book for all young children.
Janine & Janine and The Field Day Finish
are published by Albert Whitman & Co. 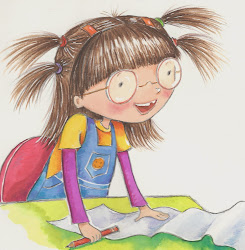 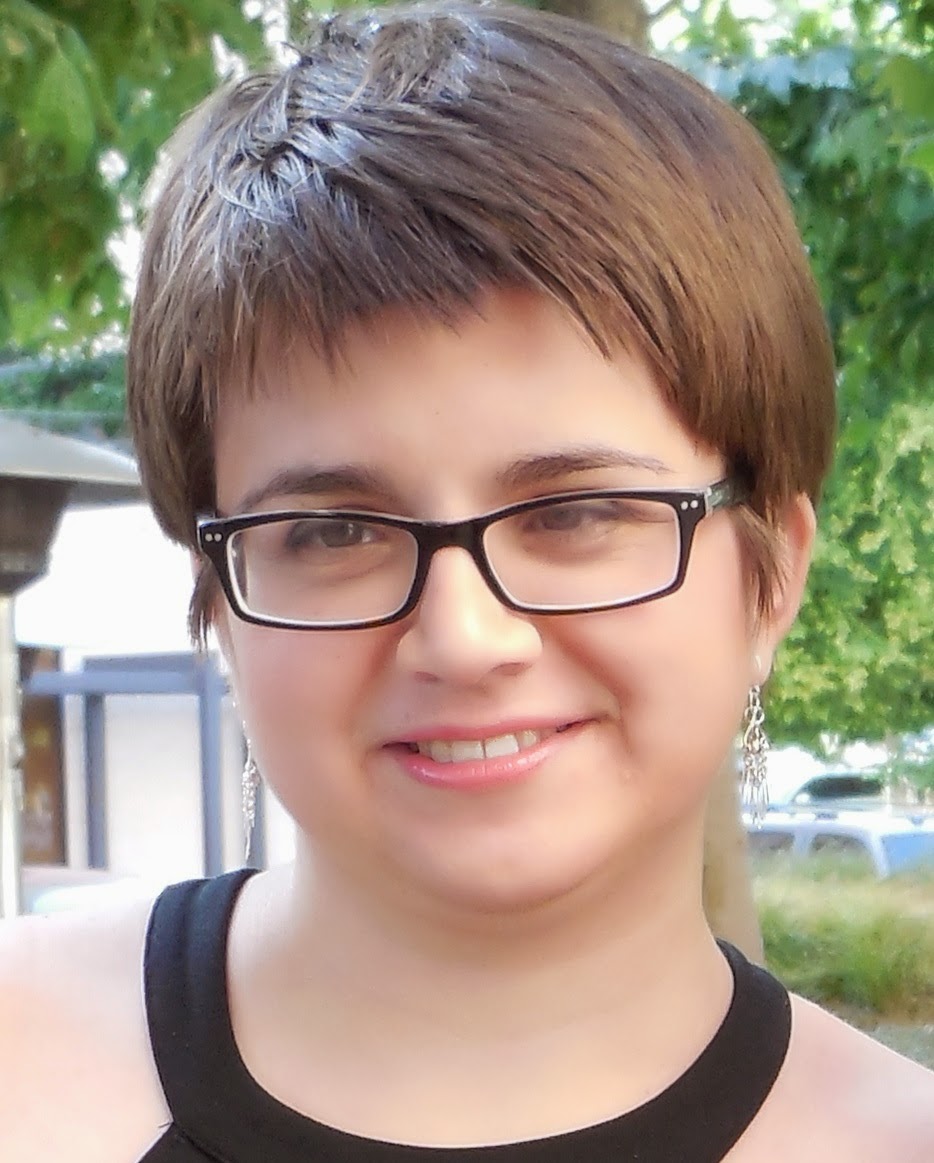 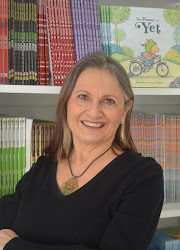 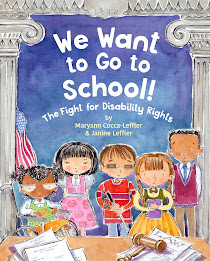 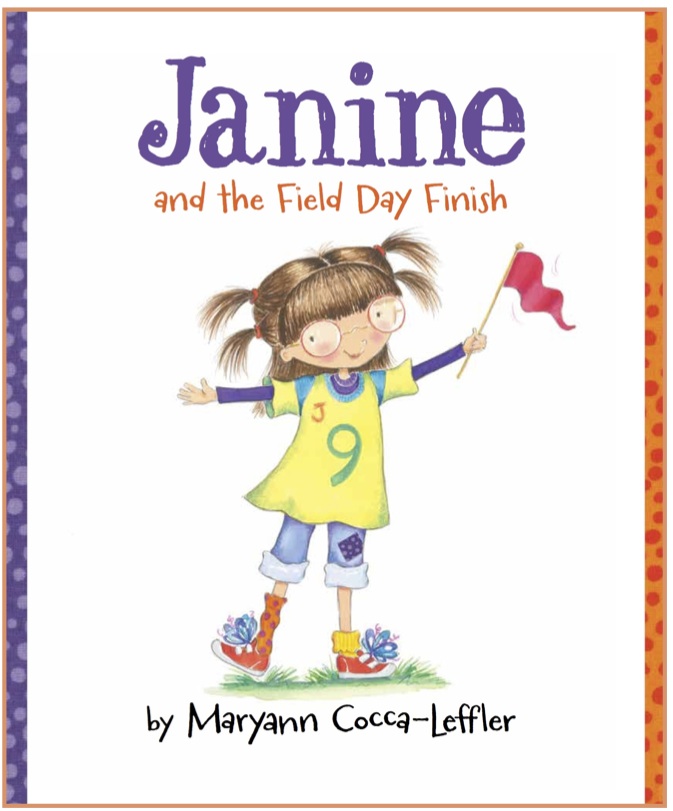 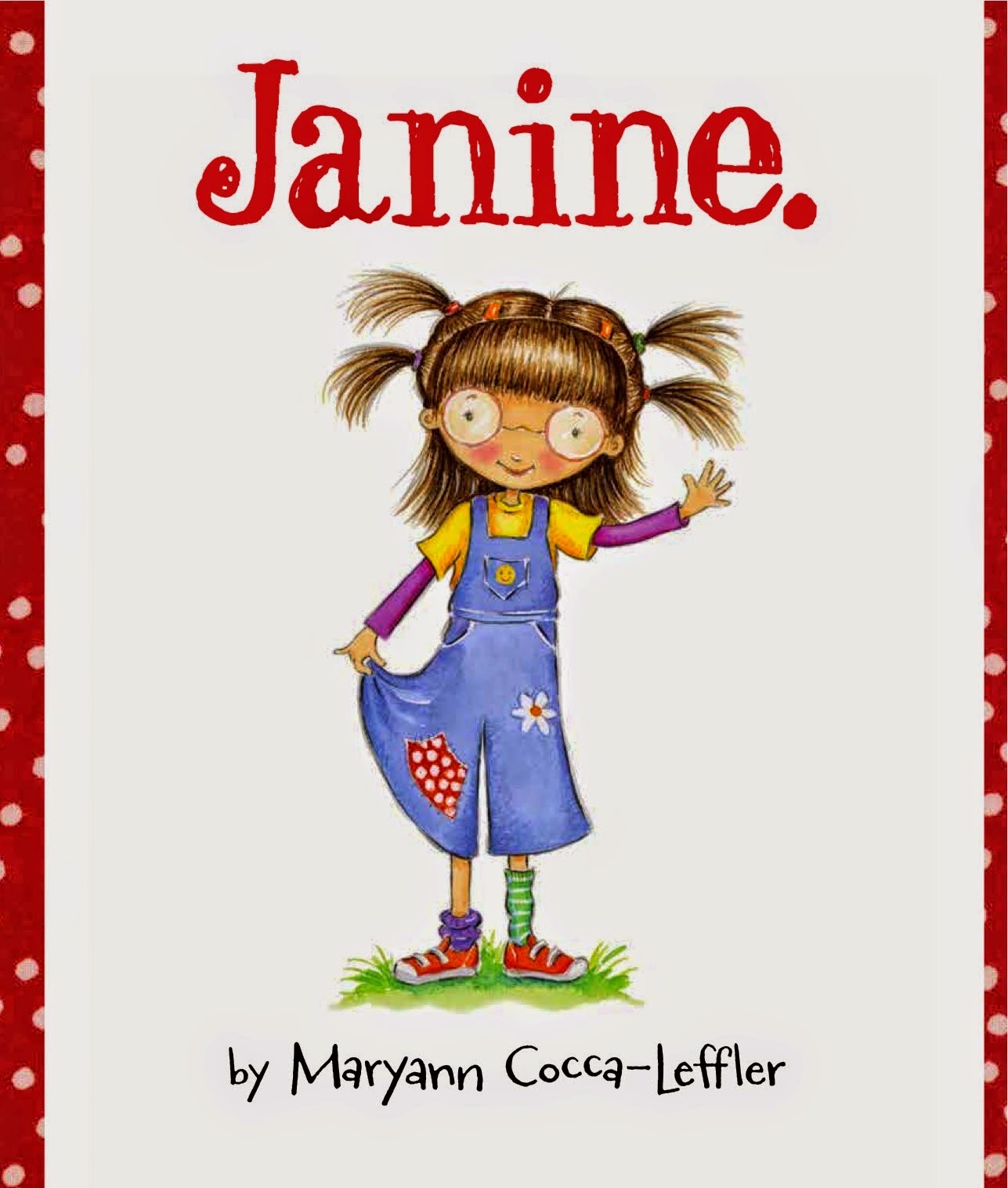 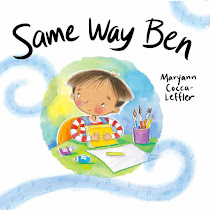 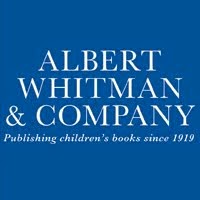